OEM’s have been pushing out the next wave of Firmware upgrades to Gen 1 handsets recently with the Optus Samsung Omnia 7 being one of the lucky ones to receive a firmware upgrade.

It has been a long time coming for the Samsung Omnia 7 to be hit with a firmware update to fix a few ongoing issues it has suffered in the community. Being hailed as one of the “must have W7 devices” from Gen 1 its good to see there’s still some love for the handsets.

Since Mango the Omnia 7 has been plagued by a known issue with its Blue-tooth connectivity ranging form limited to none altogether. Having a number of WP devices I know that each of them have had their fair share of issues, but the Omnia issue is by far the most severe with still no known fix/work-around. 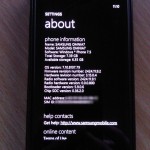 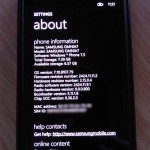 The latest firmware bring some minor changes to the Omnia 7 believed to bring better stability and performance to the phone and improved DLNA support for streaming media using the Omnia 7.

Sadly Omnia users out there, this did nothing to fix the problematic Blue-tooth issue. Soon I will be attempting to send my Omnia 7 to the Samsung shop for repair in an attempt to resolve this issue until my contact is up for Renewal.