As with Samsung recently releasing their Firmware upgrades for the Omnia 7, it is HTC’s turn not to start rolling out their firmware to squash a peskey bug plauging HTC Trophy owners after the 8107 update.

As reported priviously, there was a major issue for some regarding the Gen 1 Flag ship of HTC, the HD7 , which on reboot caused the unit to be issued with a randomly generated MAC address. The issue may sound very minor but some some (My self for example) it caused a lot of issues for MAC filtered WiFi’s.

Unlike the HD7 , the Trophy maintained un-effected after the Mango and 7740 updates, however when the HD7 was patched in 8107, the Trophy recived the buggy firmware which was plagueing the HD7 during the Mango stages.

After confiming the bug was “known” and a fix was being implemented Vodafone (the Aussie carrier who released the HTC Trophy in AUS) advised that a fix would need to be issued by HTC as its a “Software Related Bug” (Understandable as a carrier cant do anything apart from approve and push out updates).

Kudos and well done should be put to HTC and Vodafone for sorting out this fix promptly and efficently. WIthin a few weeks Vodafone was able to announce that all HTC Trophy devices on the Vodafone network should now be reciivng the new firmware to resolve this issue. 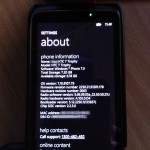 The changes pushed out in this update are :