Since the release of Mango there has been a feature that was slightly overlooked for all first generation handsets. Internet Sharing was one of the 500 features Mango was to bring to all current handsets but was strangely absent in the first wave of Mango updates.

The initial reports show that all handsets were unable to finalise the Internet Sharing drivers before Microsoft’s original Mango release which forced OEM’s to remove the feature until a later date when the drivers were supported. Currently the only device which is reported to NOT support Internet Sharing is the Dell WP7 device due to the lack of a specific chipset which is found in all other WP7 devices (BRCM 4329 chipset).

With such a speedy release that Mango preformed around the globe it is good to see that Optus have approved the Samsung Omnia 7 update so quickly when reports that the update had surfaced via some Europe and UK carriers for both the Omnia 7 and LG Optimus 7.

I personally have 3 WP7 devices on hand over 3 separate locks (Omnia 7 locked to Optus, HTC Trophy locked to Vodafone and a HD7 unlocked) and currently only the Omnia 7 has had an update push applied. This could mean that HTC are still in the process of releasing their update to enable Internet Sharing as I am yet to see any news regarding ‘official’ HTC updates. 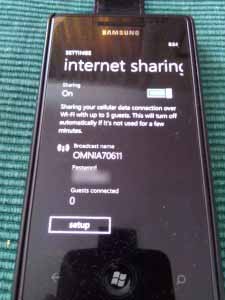 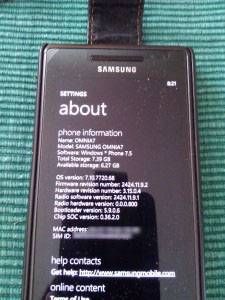 Details of the current Omnia 7 release

With this update however does not come a fix for the Omnia’s bluetooth issue which a lot of users have been reporting.

This issue, since Mango, prevents the device from detecting and connecting to a range of Bluetooth devices such as hands-free Car Kits (Since Mango my BlueAnt has not been able to connect to the Omnia 7 device). Hopefully some news will come from Samsung to fix this issue soon. However it does appear that Samsung has updated its BD Profile on the device from A2DP to WP7 BD Profile and from what I have heard from Samsung support .