Recently Microsoft has announced that WP7 version 7.10.8107  would start pushing out to carriers for testing which means its possible we should be getting out fix for the vanishing keyboard bug in the coming months.

As good as this news it, its a shame to also know that Vodafone has only just started getting 7740 update pushed out to the HTC Trophy only a recently. It does mean that a lot of WP7 users may still be left out for a few more months until we see this critical fix hit their devices. 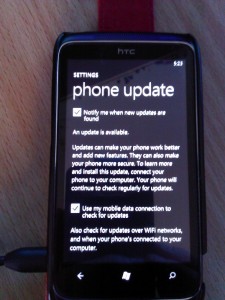 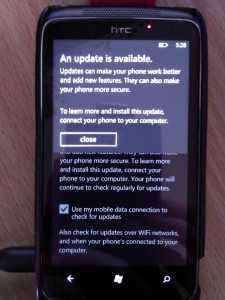 Currently I have 3 WP7’s from 3 separate sources which does allow me to have a good comparison between how AUS is faring between each carrier vs unlocked handsets.

Being on a network with 2 WP7  powered devices, these units have had some extra love put towards them as well as being the first device to offer Internet Sharing compared to the HTC handsets (However the unit does suffer for MAJOR blue-tooth issues since the Mango upgrade)

Bring the only WP7 powered device on the Vodafone network it can sometimes leave this phone left on the side line. Hopefully with Nokia about to release its Lumnia series (Which is currently on the Vodafone UK website) it will bring a few more WP& handsets into the mix