Its been a few months now since the launch of Mango and Internet Sharing on the HTC HD7. For some users each upgrade has been a blessing bringing a wealth of new features and greater functionality to their HD7’s… However, it has not been as smooth upgrade for all.

HTC have confirmed a known bug with selected HD7 models running Mango and Bootloader 5.10.2250.0 which causes the HD7 on both reset and reboot to randomly change the MAC address of the phone. This little bug essentially gives a HD& owner a very un-blockable phone MAC address. This means a normally fixed value for the phone is now a forever changing value issued each reboot or reset.

For some this may sound like a bug which wont worry a lot of users but, adding in a WiFi router with MAC filtering and you see my problem. The major benefit about this bug is WP7 and its great reliability means that the only time I find my self rebooting the handset is in the hopes of fixing a poor signal from Vodafone. With that though it does still leave the issue out there that could effect users who work in a corporate environment with higher level filtering on their company WiFi network. 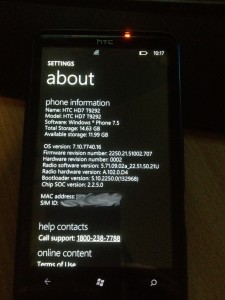 My official reach out to HTC was sadly greeted with no major confirmation that a solution was in the works and when the ETA for the patch is scheduled for.

Thank you for your reply.
We found an issue about WP7.5(Mango) for changing Mac Address for every reset and reboot after update of bootloader 5.10.2250.0 We are collection customers’ information with the phone issue and if there any update for ite, we will inform to let you know. Thanks.
Best Regards

My HD7 was acquired from Ebay for a bargain price with its original location coming from Singapore (So HTC AUS have told me) which mean’s any updates which get pushed for the Singapore HD7 will be slightly different when compared to the local HD7 in AUS supplied by Telstra. The benefits of this is I have no carrier hanging over my head when it comes to pending updates, the negative is I receive the problem before there is a fix available (Which could explain the delay in updates for Telstra’s HD7?)

I will keep at HTC until I get the date they expect to have this issue fixed.