Its been almost a full year in the Windows Phone 7 life cycle and I have been watching it very closely… With the release of the infamous Mango (aka 7.5) is rumoured to be around the corner (Last heard something’s happening September 1st which may or may not be Mango) I have finally decided to put some money up for an upgrade form a HD2 running WP7 to its older counterpart, the HD7.

The Decision To Upgrade

Originally moving from a Nokia N97, as I’m sure a lot of people have upgraded from some form of Nokia, I upgraded to the HTC HD2 running Windows Mobile 6.5. For me coming from the Symbian era it was a major step up in technology moving to a Windows based phone with a full 4” screen.

After the announcement of Windows Phone 7 there was a lot of speculation if the HD2 will be receiving the major upgrade to this Operating System as it packed the same processor as its re-hashed version (HD7). After the news was made public that no previous WM6.5 phones will be receiving the upgrade to WP7 the boys over at DFT (Dark Forces Team) were already hard at work creating a port for the HD2 to bring it into the WP7 era. After a few months into the release of WP7 DFT had officially released their Un-official Windows Phone 7 ROM for the HD2, which instantly re-ignited the lifespan of the HD2 (Which had also had an Android version of it created) causing a lot of users (My self included) to make the dive into the WP7 world. 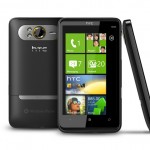 The new WP7 for the HD2 was hit with great success and was even smoother than running under WM6.5 (Which I personally can support this claim). Sadly though, this massive improvement came with a lot of minor setbacks, some resolved but others are still present in today’s releases. The following are just a few of the issues I encountered when using my HD2 with WP7 installed.

There were a few other here and there issues but these are the main issues I found when using the first major release of WP7 for the HD2.

The Right HD7 At The Right Price

After finally getting to the brink of some of the issues I was having with my HD2 running WP7 (Reception, battery, camera etc) I begun the search for a suitable, un-branded HD7 to replace my ageing HD2. After a long time searching, with a lot of ups and downs with the USD (I was monitoring HD7 pricing for a few months) I finally located a seller who had the HD7 on offer for $340 AUD delivered and most importantly, unbranded. As this unit is only released on Telstra in Aus the out-right cost of the phone would be in excess of $700, and it would be branded and locked to Telstra network (which I am not a part of), so after finally confirming the HD7 was un-branded, I took a dive and purchased the phone on the 18-8 (Thursday). Not expecting the unit until early next week I also reviewed a few options for cases and screen protectors (As you do with a new phone).

The weekend started and I received an email on Saturday 20/8 detailing the unit had been dispatched, and sadly I received no tracking details. Being the weekend I continued on hoping to find a follow up email with the tracking details and an updated ETA… However I received more than an update on the ETA of my new phone on Monday… Amazingly the phone it self rocked up on Monday afternoon (FedEx Express)… Amazed as I was the next thing I wanted to do was start ripping into it and start setting up my new HD7, however the case had still not arrived… Which did mean I was being forced to wait as my new HD7 stared me down from its tall, white box… 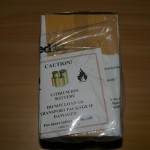 The box the HD7 Arrived in

As this unit has been out for almost a full year I will only be doing a very basic un-boxing and review as the goal of this post is purely to show my experience with the handset and general view on the unit. The HTC unit it self is a very standard collection of goodies out of the box which include your HTC AC-to-Mains charger, Micro-to-USB cable, manuals, Headphones and as this unit was imported it came with a US to AU converter. Personally I would never trust one of these units charging my phone at night while I sleep so I have ordered some additional Belkin USB-to-AC adaptors to use. 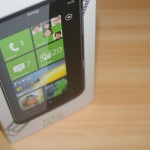 Diffrent Angle on a HD7 Box 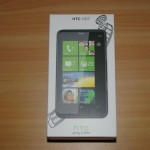 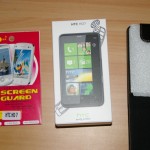 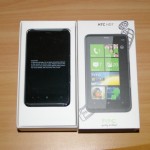 Open box of the HD7 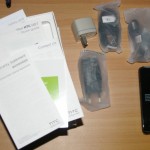 For sizing comparison I have both my HD2 and HD7 side by side which shows that this phone is the perfect replacement for anyone after a larger screened Windows Phone. 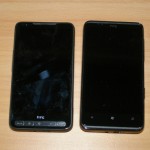 Basic comparison of the HD2 and HD7

Since I had the HD2 I have always preferred the “Leather Flip Case” when compared to the basic rubber bumper or gel skins, and this is the package which held up the entire process (Screen protector and Leather case only set me back $8 delivered)

There has been alot of roumours running around why the HD2 has never had an “official” WP7 release as both the HD7 and HD2 have very similar hardware (CPU and RAM wise). It has now been proven by XDA and DFT that the unit is able to run Windows Phone 7 successfully but there is no plans for HTC or Microsoft to allow for a free/easy upgrade path for HD2 owners.

Although the internal guts of the phones are very similar, the layout and style of the handsets are completely different. Windows Phone 7 standard state that ALL phones MUST have a minimum of 7 (6 if you count the volume up/down as 1 button) buttons. These are broken down into : 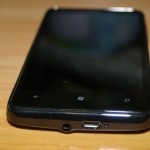 Showing the HD7's base and buttons 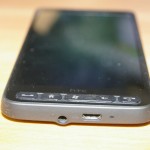 Showing HD2's base and button setup

Like most devices the HD7 comes with a very early stage of Windows Phone 7 (I believe the first build of WP7 was 7.0.100) which does require you to run a few updates on the unit to being it up-to the latest NoDo version (7.0.7392) which has a lot of general fix’s and improvements as well as a Copy Paste feature. 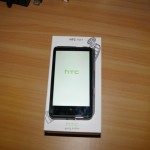 Booting the HD7 for the first time 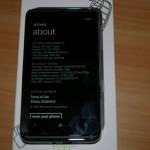 Windows Phone 7 requires Zune to update and sync files which can be downloaded by connecting the phone to any Windows 7 PC and allowing the unit to auto install. Once the drivers are installed if the machine does not have Zune installed it will prompt the user to download and install. After fully installed Zune will detect the phone has been connected for the first time and run a basic setup guide which includes naming your device and updating to the latest version. Until recently (Zune 4.8) it did require users to run the update multiple times to detect multiple patches. For example I was required to manually run the updater after Zune had auto-detected my phone was missing the Feb 2011 update during the setup stage, it didn’t prompt me to update to NoDo until I manually searched for new updates (As said this was fixed in the latest Zune release in preparation for Mango)

As this hardware has been out for almost a year I’m not going to go into alot of details as there is already a lot of reviews readly available for this handset. I will give be giving a basic run-down on the preformance difrrences after a good weeks work. 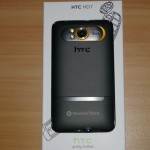 Back of the HD7 showing Windows Logo and Stand 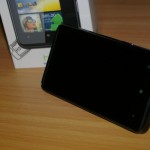 As a basic comparison to the HD2 with Wp7, after installing all the updates and installing a few apps, the phone is overall running like the HD2 with WP7, but better in almost every way. The overall preformance that the HD7 has been showing is proving to be a worthy replacement and with Mango around the corner, it will be great to be able to update without having to apply any re-flash’s etc. I have noticed that the OS is alot more responsive than when using the HD2 (that said iv been using the HD2 for amost 9 months now compared to the 9 hours with the HD7 & my HD2 had a Class 2 Memory card) and im finding it overall a smoother experiance. 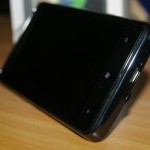 Close up of the HD7 using Kick-stand