Since the release of Mango and the recent updates getting rolled out for the Samsung handsets reported last week you could imagine my surprise when I received an notification stating my HD7 had a new update ready for download.

Knowing that HTC have reported they are working on the Internet sharing feature for their current WP7 devices i was expecting post update to see this feature on my settings list.

Sadly this update did not seem to being any new ‘features’ 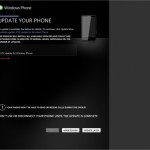 The actual update notes as pushed by Zune displayed little to no details what so ever. My handset is an unbranded HD7 which does tend to receive updates a lot sooner than the local branded handsets I own. Currently my HTC Trophy is still showing no new updates.

The above images show the new versions pre and post update however I am unable to find any release notes from HTC regarding the firmware upgrade features.

It has been reported that the HTC Mozart which has received a similar update has received the new Internet Sharing feature along with the Firmware update. Based on this blog it appears the HTC Mozart was issued with an update originally bringing the device to the current firmware 2250.21.50001.707 followed a few weeks later with another update to firmware 2250.21.51001.707.

The updates to note are :