This has been some time in the making but I have finally pulled my act together and invested some money into the Valve Store and I wanted to share a bit of what i ordered.

For the gaming community its very well known whether you hate them or love them Valve play a big part in the gaming community being behind some of the worlds largest releases to date. Well known for their Half Life series among other very popular game series (Team Fortress and Portal to name a few) Valve also has their very own souvenir/collectibles store for all their fans to indulge in.

This store is always kept very low key compared to Valves mainstream Steam Store, which deals in the Digital Distribution of most of today’s games, “The Valve Store” as its known, sells a number of key Limited Edition artwork from Valves array of games as well as general merchandise.

Its always been a goal of mine to acquire one of the Limited Edition artworks and add it to my gaming collection and with the recent release of Portal 2, there has never been a better time to aquire some Valve artwork (As well as the strong Aussie $$$).

There has been a number of Limited Edition Portal 2 lithographs recently released and a number of them were recently signed and numbered by Jeremy Bennet, Valves Art Director. All of Valves 24×36 inch artworks start from $39.99 for standard prints or $100.00 for the limited (100 copies) signed versions. 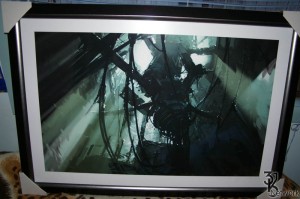 The print (and a few extras) arrived within 7 days from ordering, which from the US it always a plus when placing the order. The print arrived in a standard mailing tube with the Certificate of Authenticity and print. I was able to secure limited edition print number 43 (1 too many but still the first half). 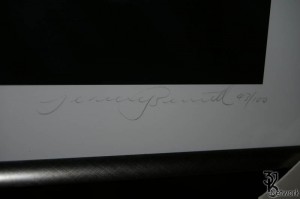 Now that I have this amazing print the next thing to do is frame the print to make it worthy of its limited status.
(Side Note : The pictures were all taken post framing the print but I did not open the print my self until it was in the framing shop waiting to pick a frame)
The guys down at Framing Warehouse were able to assist me in picking, what I believe now, to be the best choice of frame available. The final pick was a thick black bordered frame with a silver trim/inner-boarder, and for around $200 the print was custom framed and sealed. Being a custom frame the print fit in 100% and due to the boarder which comes standard on almost all Valve prints the end result was absolutely perfect. 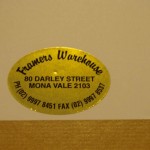 After originally going to opt for a “close fit” frame from Ikea, I am 100% satisfied with my choice to opt for a custom framing job and pay the premium to suite this limited piece. 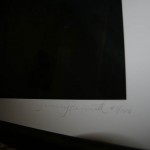 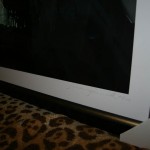 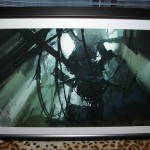 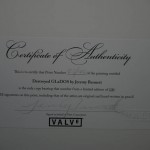 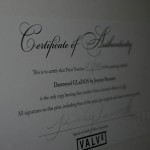 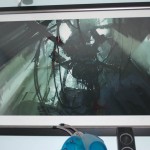 Framed print hanging on the wall

With all the hard and expensive part of getting this print done, it now hands high  in my room, joining the collection of prints and posters already filling my diminishing wall space. With an overall cost of around $300 framed, the result was just as I was hoping, absolutely amazing and a great addition.

As i was making an order on the Valve store, I wasn’t going to waste this opportunity to acquire some additional Valve merchandise. There was a few items on sale  which have since come out of season or introductory (Christmas cards, shirts etc) so I took the liberty of adding some other items to my order for only a few extra to make the cost of delivery slightly less per item.

Being a new item I’v always wanted a Portal Shirt (originally telling me about cakes and lies) but this new Rat Man shirt caught my eyes with the back 1 liner as well as the puzzle portal image on the front. There may not be a mention of cake… But there is a great GLaDOS 1 liner which reads “Because Science Rhymes with Compliance” 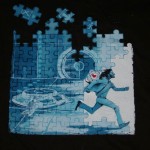 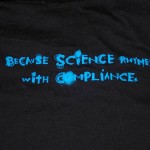 Coming close to the holiday season these sales can either a good thing, great to mail out some gamer themed Christmas cards in the coming months, or even a bad thing (if you want to think of it as a bad thing…) with a quick push to clear out all of the old stock in time for the new seasonal stock to ship in.  Coming in at only $1.99 ea USD (So that’s even cheaper once converted to AUD) it was almost a no-brainier for me to purchase these seasonal cards. Being a HUGE fan of Team Fortress 2 and Left 4 Dead i just could not resist… 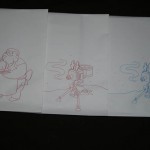 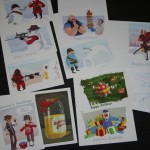 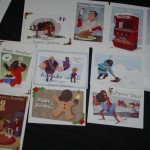 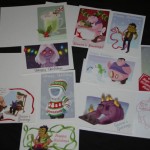 Each pack contained a number of various cards with my absolute favourite being the TF2 Turret dressed in Christmas gear.

Overall it was another very successful order from the Valve Store (My first was the Plush Companion Cube back when Portal was first main-stream, all those years ago) and again I leave with more possitive feedback to the guys at Valve.