Recently Lenovo held a Business Partner event here in Sydney to share their first Andorid Tablet range launching later this year. I was able to get a bit of a hands on experiance with the new IdeaPad and ThinkPad Tablet range.

Lenovo - Those Who Do

I thought I would go into a bit of history about Lenovo just for an intro which has helped Lenovo become who they are today in our region (AUST)… Lenovo is the company which in mid 2000 acquired the PC division of IBM and begin producing the Think series of  under the Lenovo brand by early 2006-07. Since this major acquisition Lenovo has been pushing forward in the AUS market fighting against both Dell and HP currently ranked 3rd in hardware vendors.

Lenovo has always been viewed as the “Business Brand” since its acquisition of IBM’s PC division and has in recent years started pushing into the consumer and SMB market which has so far been met with great success with the launching of its Idea series of consumer based products.

The new IdeaPad and ThinkPad Tablets will be Lenovos first major Android based device to launch and will be packed with a Nvidia Tegra Dual-core 1GHz processor, bringing these tablets in-line with all the current Tablets already on the market.

Both of these Tablets without a doubt will be a great challenger against the current Android based tablets on the maret, but if this will be enough to upset the iPad groupies out there is yet to be seen.

After having some time to play around with the unit there was some things that came straight out as pros and others which may be viewed as a downside.

This unit which is aimed at the business sector featuring 3g capabilities on almost all models (Currently the 16GB model has a WiFi only version as well as a 3G model) and has a lot of features over its IdeaPad counterpart.  One of the major differences compared to the IdeaPad is the presence of 3 additional physical buttons (Rotate Lock, Internet, Back, Home) compared to the IdeaPads 1 Button. 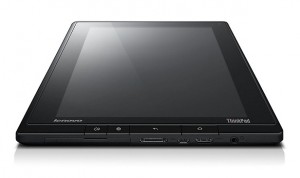 Both units feature very durable Gorilla Glass to protect them against almost any harsh user experience, which Lenovo was not taking lightly as throughout the night the constant sound of ThinkPads and IdeaPads slamming against tables to prove how durable they really are. This goal of Lenovo’s to release a very sturdy device is not taken lightly with the overall unit feeling very robust and durable, however it does pickup some extra weight coming in at 715-730 grams. To give some comparison, an iPad 2 has a weight of aprox 600-610 grams and the Asus Transformer comes in at ~680 grams.
It was one of the first things that came to mind when I first picked up the ThinkPad but after reviewing the added features (an array of connectivity and durability) it becomes apparent that weight must be sacrificed for these features.

On the night the ThinkPad preformed exceptionally well running on its Dual-Core hardware. The devices responsiveness when opening and changing between apps preformed exceptionally well and as per most “stress tests” Angry Birds preformed flawlessly. The ThinkPads Tablet Pen is also an impressive addition to the ThinkPad, which is designed utilize OCR on an array of notepad applications which are included with the device. After testing the Pen out for a bit, I found that the overall OCR technology is still limited to how well you’re able to write on a Tablet using a pen. Using the standard “Quick brown fox” sentence the OCR preformed surprisingly well (Considering my writing is bad enough as it is, the ability for this software to understand and translate my hand writing is very impressive) but as all software there was the odd mis-represented character during the sentence, but with time, one can get used to the feel of writing on a Tablet.

The ThinkPad will have an array of accessories at launch all aimed at a “business” ranging from Docking Stations which enable the ThinkPad to be used as a basic “workstation” with the addition of a keyboard, mouse etc to be connected. The more versatile Keyboard  Folio, which incorporates a USB powered Keyboard and Leather Folio, designed for on-the-go use and functionality 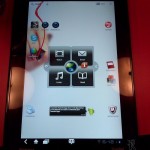 On the other end of the spectrum Lenovo is offering consumers with another very durable and robust Tablet with a very similar build to the ThinkPad. Although they both feature a Dual-Core Tegra encased in a 10.1″ tablet case, it does not feature the high end Gorilla Glass which does mean it wont be as “durable” as a ThinkPad but it still has that firm Lenovo build feeling. 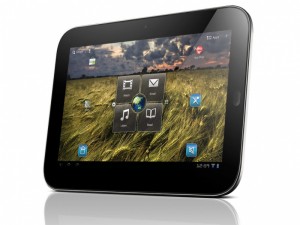 As this unit is aimed at the consumer sector there is some elements missing but some elements added when compared directly with its business version (ThinkPad)
This unit does not feature a 3Gb compatible model at the time or writing as well as a lack of ports and options yet it is slightly more weighty coming in at ~ 720 grams and .5mm thicker. The IdeaPads case has a more plastic feel to it and will be coming in a wider variety of colours ranging from Black, White, Red etc meaning the units designed for the fashion conscience consumers able to pick a colour that suites them best.
One of the major features that surprised me in comparison, was the addition of a built in LED flash on the IdeaPads rear camera. Slightly shocked i missed this feature i checked a few times on the ThinkPad and was correct, there is no built in LED flash on the ThinkPad compared to the IdeaPad. As minor as it may be, this may be a slight pet-peeve for some users as i would expect this to be included in the higher-end model and maybe overlooked in the lower end models.

Like the ThinkPad, the IdeaPad’s performance on the night was as expected for a dual-core Android device. Response was snappy and opening/closing applications was quick and smooth. There is a bit of a limitation compared to the ThinkPad as there is only 1 physical button on this device which, which after using other devices which have the addition of a physical search and Internet buttons, it does feel a bit lacking. In saying that its always down to personal preference (After all the iPad has only had 1 button in its entire life)

At the time of writing Lenovo is very limited with its accessories listed for the IdeaPad with only sleeves, screen protectors and covers available and charging docks. After this product has been fully launched and hit main-stream i would expect an array of accessories to follow. 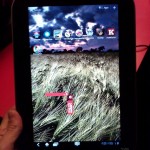 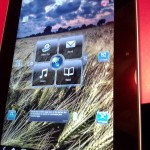 The event I attended was to show off Lenovos new products from their ThinkPad and IdeaPads to their X1 Series laptops. As per most Lenovo events they like to let you take something home as a Thanks for coming. This time Lenovo was handing out “Transforming USB Drives”, oh and I think i forgot to mention, as Lenovo had alot of marketing investment in Transformers : Dark Side of the Moon, there was also a screening of the movie (Makes sence with the Transforming USB Drive now dosn’t it…) 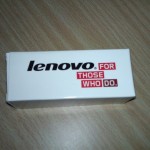 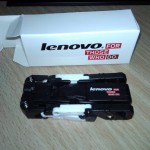 As I was Transforming this USB drive and started to guess what the unit would become, I started to go back to the original Beast Wars series of Transformed and as the drive finally took its form as a cat-like creature  I started wondering if the concept of the “Transformer” was based off Cheetor (apart from the obvious colour differences). 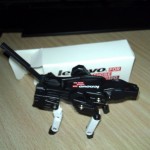 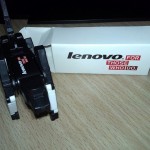 Thanks for a great night Lenovo

Lenovo’s Think/Idea Pad series is due to launch Q4 this year (September/October) and will be a great addition to the already heavily populated Android Tablet market.