With the new Nokia Lumia still suffering from known battery and camera issues as well as a number of other known bugs, it appears that Vodafone has been the first vendor to release the much needed fix for the Lumia 800.

Originally announced back in Vodafones March 14th Software Update post, Nokia was officially ” preparing update for submission”, which translated means “Nokia said there is an update, we will review and let you know how things go”.

The Nokia update was processed through its normal Vodafone Update Schedule hitting testing stage the next week and labled as “Approved by Vodafone. Pending roll-out by manufacturer”.

Update : It appear that now Vodafone AU has Halted this update due to a bug in the Nokia Lumia firmware patch which claims to cause “the volume of music playback may behave erratically leading to the volume exceeding allowable levels on the device”. So it appears we are back to playing the waiting game…

A few good weeks had passed since the original announcement of the update bring ‘prepared’ for the Vodafone locked handsets, when on April 2nd team Vodafone officially announced on their blog that the new Firmware 12070 update had now been approved with updates being pushed out this week. This puts the Lumia 800 update in a time frame of approximately 3 weeks from “here you go” to “there you go”

Vodafones official details on the patch are as listed

This makes Vodafone again one of the first (Excluding Telstra who launched with this firmware) Australian carriers to release this firmware update across its fleet with no word from Optus as to the status of their update. Although suffering form a lot of network related issues Vodafone has proven to be one of the preferred vendors with regards to the efficient release of their software updates. 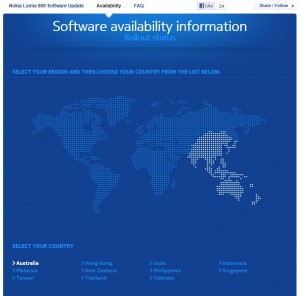 Although Vodafone stated that “Nokia have advised that the update will begin rolling-out over this week“, it appears that Nokia might have forgotten to tell their own internal teams of the update being approved. Over at the Software Availability Information page setup by Nokia, it appears that Vodafone is still listed as “Waiting for approval”, which we know from the posts on the official Vodafone Blog is not true. 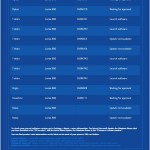 I can confirm at time of writing there is no update listed on my Vodafone branded handset, but it is still early in the week which the update was scheduled to be pushed out.