Like the HTC HD7 it seems Samsung is keeping fresh with the latest updates pushing Tango out to Gen 1 Handsets. 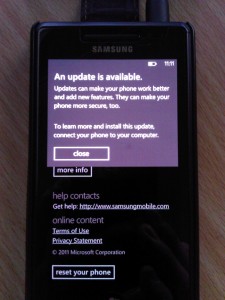 As in previous posts relating to the latest Windows Phone 7 update Tango  which brings a few new features to the 1st gen Windows Phone devices, such as enhanced MMS messaging support and support for 256mb RAM powered devices.

Its great to see that Optus has kept it self in-line with the current release schedule issued by Microsoft and has pushed out Tango in line with unlocked handsets.

Optus always seems to play a very quiet approach to the update scenario unlike Vodafone and Telstra who all support their own blogs and upcoming update section, Optus has almost no social website dedicated to upcoming patches or changes regarding their network locked handsets. 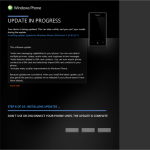 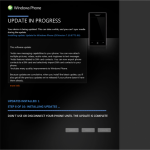 Similar to the HTC HD7 the Omnia7 received both 8112 (MCR2) and 8773 (MCR3 a.k.a Tango) in the same update cycle which appears to be how all current Gen Windows Phone devices will be receiving the update. 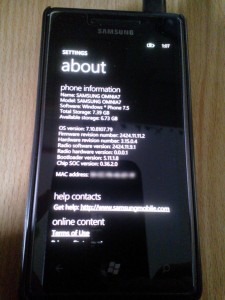 This is now my 2nd handset which has been upgraded to Tango and as per the HD7 update, there was no other alterations or updates to both the firmware or any other section of the phone. Both updates seem to only contain the required Tango OS updates with no other changes. 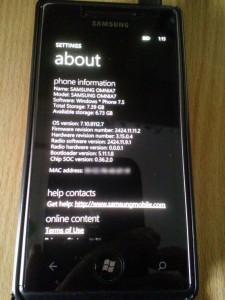 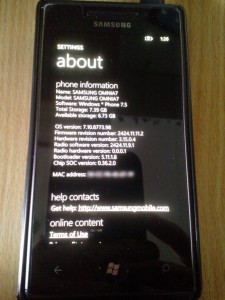 Unlike the HTC HD7 which received an update in May, there has been no updates since Feb for the Omnia7.

As on the HD7, the Tango update for the Omnia7 installed with no issues and now supports the enhanced MMS functions along with all the other benefits Tango brings.

The Omnia 7 is now only waiting for the next major Windows Phone update (Apollo) to land at the end of this year which will hopefully bring Windows 8 like features to the current generation of Windows handsets.
This update brings my fleet of WP7 devices as below,