Its been some time now that I got my hands on the Nokia Lumia 800 but i have always been missing that 4.3″ feel that my HD7 offered. Since Nokia‘s original announcement and launch of the Lumia 900 the clock has been ticking down till the UK and Australian launch date for the HSDPA model, which officially landed on AUS providers this month. 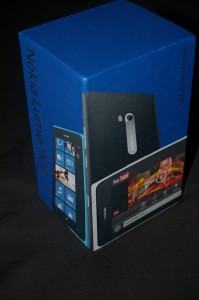 The Nokia Lumia 900 officially launched early this month, covered by the blanket of the Galaxy S3 which over shadowed the Lumia‘s Optus Exclusive launch (Which seemed to even get past its social media staff with very few words from them stating its official launch). Samsung’s Galaxy S3 aside, Nokia‘s Lumia hit the online store June 1st, as stated by Nokia, it launched with an Optus and Virgin exclusive with stores getting stock before mid month.

The Lumia 900 officially started hitting unlocked vendors (Allphones, MobileCiti and Harvey Norman) within 2 weeks of its original launch from Optus.

At time of writing the best priced Australian unlocked and unbranded availability of the Lumia 900 are :

The Lumia 900 is one of the first Windows Phone 7 device to launch with a quad band frequency and LTE support (for US and Canada carriers only sadly) which means that this will be one of the first devices to be the most compatible with Australian’s split carriers allowing 900mhz for both Optus and Virgin or 850mhz for Telstra and Vodafone.  (Meaning no specific model hunting required, unlike the Lumia 800 which suffered from network specific models)

Some key features of the Lumia 900 are:

I have both the Optus Lumia 900 and an AllPhones unlocked Lumia 900 (Due to recent contract renewals with Optus I have available to me). Since my Lumia 800 purchase a few months back I have been in the market to upgrade to a Lumia 900 since Nokia‘s announcement early this year of their 4.3″ power house Lumia.

Since that announcement I picked up a cheap Lumia 800 850mhz as a mild upgrade from my HTC HD7 900mhz. Requiring an 850mhz compatible phone after changing mobile providers from 900mhz to 850mhz network I was suffering from major network performance issues and required an upgrade, this lead me to my Lumia 800 purchase mid term.

There has been a lot of detailed and video unboxings done for the Lumia 900 since its launch in US on AT&T so I will not be going into a great level of detail for the unboxing as it has been done to death by now.

The following is some images and notes which simply detail the Lumia 900 and to show some of the small differences between the Optus and Unbranded Lumia 900 available in Australia.

At Launch the Lumia 900 was released under the Optus plans offered only through their official retailers and online. Although no branding is located on the Optus Lumia 900 they are some minor differences as detailed above from the box.

Although one box is branded as an “Optus AU” both phones appear identical (No physical network branding) and both phones are unlocked (Source : Tested Optus online shop using Vodafone sim)

At the time of ordering the only available colours from Optus was Matte Black or Glossy White (AllPhones only appear to be stocking Black at time of writing). With a great deal of thought going into colour of choice, my end decision was to avoid picking any other colours and stick with the sleek black styled handset. Due to my phones living inside a case the end choice was irrelevant as it would spend most of its time covered by a black casing. 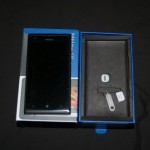 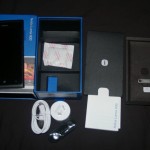 The Lumia 900 comes with the standard accessory pack consisting of :

All of these goods are housed in the  same styled Lumia ‘Box in a Box’ giving it an all round tough housing while in transit. In saying that, it does seem that the Unlocked handset I received from AllPhones did suffer from some more than average handling due to the slightly crunched box. Although slightly bruised and dented it does mean the box did its job in protecting the contents with the 900 being untouched. 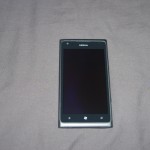 The one major issue i had with the Lumia 800 was the flimsy hatch which concealed the Micro USB port. As sealed and smooth this did make the 800 look and feel, it also required constant opening and closing when charging or syncing with the PC. This may sound like a minor issue but after daily opening and closing of this hatch it begins to be a small worry in the back of ones mind how easy it could be to snap off. There has been many times I have used the phone when connected to the PC or charger and could see stress on the hatch if the cables get tangled the wrong way. The Lumia 900’s USB port is located smack bam on the top in the middle of the unit, a great location and no door or cover to worry about.

Taking advantage of the new Micro Sim Nokia has followed most mobile manufacturers now and taking advantage of a Sim-Eject-Tool as opposed to a slide, unlock mechanism (Found on the 800). This form of Sim card does give an overall smoother feel to the unit makes it appear much more solid.

The Lumia 900 has by far one of the most vibrant screens i have seen yet on a WP7 device (ranging from all my currently owned handset the previous best was the Omnia7/Lumia800). The screen, like the OS has great responsiveness to it and feels great when using it in your hand and texting.

Nokia seem to be one of the few companies who have acknowledged most cases do not allow for headphones to be connected while the case is closed or the phone is in its pouch. The Lumia 900 has followed the Lumia 800’s and many other recent mobile design and kept the 3.5mm connector on the far left-hand top section of the phone, a feature missing in a lot of early HTC handsets.

This makes the headphone socket easy and quick access when the phone is in a pouch or case while inside a bag or pocket. 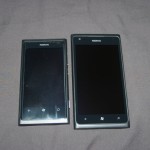 I’m not sure if it is just me but I get the feeling that the 3 capacitive touch buttons on the Lumia 900 seem to be smaller when compared to my HD7 and Lumia 800. I would assume that Nokia attempted to squeeze the large 4.3″ display into the Lumia 900 shell and had to sacrifice some of the button real estate to keep the device light and as compact as possible.

The buttons them self also appear to be duller brightness when compared to my Lumia 800 and HD7 with a slight yellowish shade over all 3 buttons. With comparison against my unlocked and Optus Lumia 900 it does appear to be a hardware standard. Nothing too major but something which did stand out when looking over the phone.

Nokia did carry some traits of the Lumia 800 across to its big brother which is a small but still negative feature of the Lumia phone range. The buttons on the Lumia phones have always had a ‘loose’ feature to them and have never felt quite as robust as others have managed to achieve. Not too much of a noticeable effect but some may notice.

The buttons also appear to be settled rather loosely into place (Secured in the 900’s housing well as not to fall out, just some extra room around the button it self) which can cause the sound of rattling plastic if your hearing is up for the challenge, one of the not so noticeable features but still present in the Lumia range. 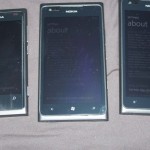 The direct comparison between the Lumia phones does show it self as being the 800’s big brother as almost a carbon copy of the handset onto a bigger shell (With some additions such as FFC etc). Although being a larger phone, it does fit well into your hand for a single handed experience and is still considered a fairly light phone. For all the speed texters out there it makes typing on the Lumia 900 a much better experience due to the increased screen size. 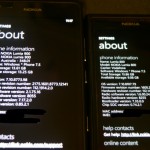 The Australian Lumia 900 ships with Tango in all its glory such as Internet Sharing and the multi MMS features. Sadly the Lumia 800 is still awaiting the Tango or MCR3 update which is due out over the next few months.

Its a pleasure to welcome both my Lumia 900’s to my Family of WP7 devices and it will be a shame to see both my Omnia 7 and HD7 put aside now purely for hardware testing and spare handsets. Next on my list is a hand down of my 800 to replace my Trophy (Replacing my final 900mhz phone with an 850mhz mobile) which will then see my WP7 family be upgraded to all 2nd generation handsets ready for what ever comes their way.

The Lumia 900 feels like the 800 but allows for the larger using and viewing experience with the easier functionality of a Front Facing Camera for voice calls. Build quality of the Lumia 900 is like any Nokia phone in the past, feels very sturdy and durable. For the current range of WP7 devices on the market I would highly recommend the current Lumia series with the 900 being the top of the line, king size  Lumia.