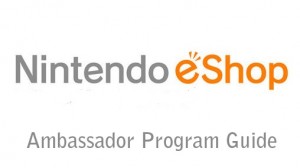 It just so happens that I was one of the many who picked up the Nintendo 3DS console at launch in March and like most early adopters, only tested the unit out before putting in in its cradle in wait for a better series of games to hit the console (or like me, Zelda).

I try to keep an eye on all of the gaming news circulating around the net these days, but sometimes you overlook an article or 2 during the daily browse… Sadly for me it was the series of 3DS news that I just happened to overlook, until it was too late. After reading through the news of the week playing catchup on Kotaku it appears I had overlooked the warning messages regarding the 3DS Ambassador Program closing that day (Friday 12th Aug). In annoyance that I had missed the news I quickly powered up the 3DS and started updating and creating an account on the Nintendo Store in hope I may make some cut or at least show I have a launch 3DS.

As the weeks went by I came across another article which seemed to focus at me and anyone else who simply forgot about the original Ambassador program, with a few words which let me breath a sigh of relief.

After reading those words there was a moment of joy which rushed through me, knowing now I can finally submit my details to the Ambassador program.

Nintendo must have acknowledged that a lot of users, like me, just had let it slip, after all the only requirement was to do a simple update before a specific date (Sometimes they ask too much of a simple gamer…)

If you accessed the Nintendo e-shop at any time before August 11, you’re automatically on the Ambassador Program. That’s not new, but probably worth reiterating.

If you didn’t access the e-shop, you no longer need to fill out any forms or pdf form. All you need to do is send Nintendo your receipt, along with your name, email address and the serial number of your 3DS.

Credit card statements or any other statements aren’t viable methods of proof of purchase — even if they feature a letterhead.

Nintendo also recommended keeping a photocopy of your receipt since they won’t be able to send any back.

You have until September 30 to register.

You must send your receipt and information to the following address:

With this I very quickly dug out my 3DS receipt form Big W and got the process underway, unlike the first offer to simply sign-in to the store with the latest update, this required an investment of 60c postage to send all the required details to Nintendo (Small price to pay for 20 free games I guess).

Personally I have an issue with sending my original receipt away sometimes… Sooo I sent a B&W copy of my receipt with fingers crossed they would accept it and it would pass as an “original”.

Unlike the first time, i was actually on the ball with this task… Invoice and all was in the post on Monday (5th September) with a guess it would hit Nintendo mid/late during the week.

This of course is when the hard part comes into play… Like most people, I wasn’t to keen to shell out $3 to get notifications and signed proof of the mail being delivered, it was a simple wait and hope I get some form of notice from Nintendo thanking me for being too lazy to simply sign into the store to get entered into the program…

It was to my amazement when I get at call on the work phone and get a “Hi its [Lets call her Jane] from Nintendo here.”. Now I get a lot of companies calling me from time to time, but when Nintendo Australia calls you… its a bit of a shock to the system. After fumbling around thinking why Nintendo, of all the companies, would be calling me it finally struck a cord regarding the receipt and details I mailed in.

Apparently Jane informs me that my receipt is “not valid”, which for a moment gets me annoyed I wasn’t able to cheat the system sending in a photocopy of the receipt, however this wasn’t the case. Jane then goes on to tell me that the date on my invoice is listed at 07/03/11 which cant be true as the 3DS console was not released until the 31/03/11. Which does spark a bit of a discussion, as its still even more guaranteed a “launch console”… Right?

After a bit of discussion it was determined that the Big W invoice date was the date of the Pre-order not the actual stock delivery date (Just Nintendo crossing their T’s and dotting their i’s apparently). To confirm this Jane called Big W Head Office and found that was in fact the case, and with the all mighty BIG W’s assurance the console was delivered on the launch date and with that, Jane will be processing my 3DS as part of the Ambassador Program. *Cheers*

After getting my 3DS approved for the Ambassador program it was now time to actually get some freebies for my love and support (and extra $100) I showed for Nintendo’s 3DS. There was 1 small catch which was attached to this mail in claim… Processing the Ambassador program this way did mean I would be forced to wait an additional 3-4 weeks to receive my freebies via the 3DS Store.

Which did mean I now have a lot of time to spare to finish Zelda… But Jane also advised that it may be sooner but to expect the worse being 3-4 weeks.

As I sit and wait for my 3DS gifts to become active on my account and to give them a spin (20 games in total should keep be busy until StarFox is released I guess) I do urge anyone who has not already submitted their console to the Ambassador Program to complete the steps above and sign up. Nintendo may have allowed us this extra time, and form what Jane mentioned there has been a lot of submissions so far, I’m positive this will be the final extension that Nintendo will be offering.
The cost of these games is meant to be the cover of $100 to off-set after the initial drop, so 10min to copy your invoice and 60c to post it does start to feel like a penny in the ocean when compared to what you receive.

The final days of the Ambassador program close 30th of September (Which for some people means in the mail 1-3 days before unless you express post it). If your one of the many who are not sure if your console is part of the Ambassador Program this site will confirm if you are or aren’t registered for the Program.

I will be updating when i do finally receive my freebies so keep an eye out.