Microsoft’s Xbox 360 Console has been offering a service called Games On Demand for some time now, which is similar to Digital Distribution platform Steam for the PC sector. I have been very keen to give this a real test run but have never had anything “worth while” to test it on, originally waiting on Halo CE to hit the sales for its anniversary later this year but then I noticed a good old classic has hit the Deal Of The Week.

Deal Of The Week

Metal Arms : Glitch in the System has been a general all around favorite of my’n since the early days of the Xbox back in the early 2000’s all the way up till I packed my Xbox system and all my games only last year.

Before I boxed up a piece of gaming history to store away, MA:GitS was one of many games I spent a quick 10min booting up and having a last crack at on my classical Duke Xbox controller before they all hit the storage containers and, like all the classics I spun up, the many gaming memories came flooding back.

When I noticed not only a game I enjoy, but an Xbox Classic game hit the Deal Of The Week, I took the opportunity to grab a digital piece of the Xbox world as well as giving the Games On Demand a bit of a spin, to see if the Xbox’s ability to delivery console games digitally would be an achievable feast.

The overall performance of the network I believe is not the greatest I have seen from Microsoft servers, but its understandable why Microsoft does not push this as a brick and mortar replacement. Downloading games from Xbox Live is normally no major issue when it comes to most arcade games which come down to a few hundred MB here and there, but when we start talking full version games, the downloading delay really starts to hit hard.

Metal Arms Glitch in the System weighs in at approx 1.61 GB, which is almost 1/3 of a standard single layer DVD, which most games incorporate 8.5GB Dual Layer discs making this game very small in comparison.

Coming in at 1.61GB it took approximately (Based off my stopwatch application) 12:13 (mm:ss).
This means that the download was running at speeds of approx 2.24 mb/s (If my calculations are correct that is). As its almost impossible to determine the location of all the servers or if it was my link or Microsoft’s link its a safe bet that this download in no way maxxed my connection.

For reference my connection is able to handle up-to 10mb/s running on the Optus DOCSIS 3.0 network which I have achieved on some sites and systems (Microsoft MSDN, Steam etc)

The one issue that has always seemed to plague the Xbox Live Marketplace for games is the condemning cost of the content. Its always good to see older content getting a sale to make it more appealing for users but the costing for an Xbox Classic game still leaves a sourer taste even at this price.

First thing is first…. we get ripped off and we know it… Just for being Aussie we get slugged with a $4.80 price hike on top of the data we have to download the content.
Second… $20 for an Xbox 1 game… Now I for one do not know if Microsoft even want to sell these games sometimes when you can go to your local EB games and grab a 360 (Yes the latest console) game for around $20.

The price drop on this game in particular does offer a much more appealing price point coming in at approx $13.20 for this fine piece of Xbox gaming history but… still charging over $10 for a game of this age???

How Much is too much Microsoft

I’m sure there is some form of back end Microsoft powered calculator which determines these price points for all of Microsoft’s XBL content… but for real Microsoft. There is a major problem offering games that are from your first gen console at almost next gen prices (Classic 360 Games On Demand sell for $29.95 which is almost a difference of $10 or almost $1 per year of the games age…).
I think its about time Microsoft took a big long hard look in the mirror and start to review its pricing structure if it ever hopes for GoD (Games on Demand, good TLA isn’t it) to be an alternative for gamers.
Just for the side note as well, I personally would buy some additional Xbox games or On Demand games if some of them had sales similar to Steam  which focus’s on quantity of sales to cover cost. I also believe that ALL Xbox games should be priced at a starting point of $10.00 max, from this point sale discounts should be added.

I have to say that there is nothing negative to say about the experience of purchasing games via the Xbox Games On Demand system either online at xbox.com or via the 360 unit it self. Both platforms are very easy to use and make the overall transaction quick and painless if you have an account all pre-setup.

One small issue i found which did cause some issues was tracking down Metal Arms via the 360 interface. Sadly there is no “Search” function like on Xbox.com and if I wasn’t using the “Deal Of The Week” icon in the main Games section it would have been a bit of an issue. It does appear that Microsoft’s “Xbox Classics” seem to have a few listings with “Full Game” in their title, which makes this game appear under F not the actual games title. Even stranger, it appears to only be a select few games which have been graced with this strange titling. 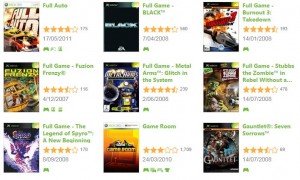 Xbox Classics in Games on Demand

I view my self as an avid gamer and have been around for a number of consoles. As a major fan of Digital Distribution I think Microsoft pursuing a Online On Demand 360 game delivery system is a great idea. What I don’t think is a great idea is their pricing guidelines.

Microsoft has always has issues in the past due to pricing compared to overseas, sadly the 360 Marketplace is no different with this issue of regional pricing. As much as I would love to see Microsoft dominate the console market, with the current persons in charge of the digital pricing, its never going to happen anytime soon.

The overall experience using the Marketplace to download and purchase Games On Demand was a smooth and very simple process. Installing the games to your console is only 1 extra click after purchase and with a strong cable or ADSL2 link games can be downloaded either during dinner or overnight.

As expected Metal Arms worked flawlessly on the Xbox 360 with snappy load times, which is not only an added running from the Xbox’s internal HDD, but the improved hardware over the 360 as well.

With the issues if price aside, I believe the Xbox Live Marketplace for Games On Demands has a very strong chance in the challenge of digital or physical… But the pricing issue needs to be addressed.

I may give a bit more of a review/experience report regarding Metal Arms, but I do recommend anyone who see’s a great classic on sale for ~800msp to pick it up and give the Xbox Games on Demand a chance. For the ease of not having to get out to the shops or wait for the delivery in the mail, its a great alternative.